Superstition Devlog 3 - The R in RPG 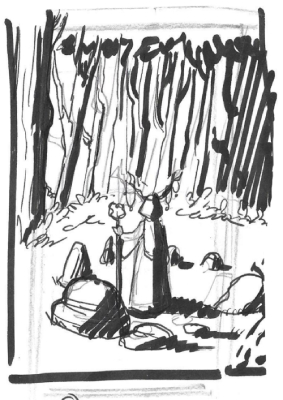 Superstition launches on Kickstarter the 10th of February 2021

Last time I spoke about how I developed some threadbare mechanics for Superstition to present some interesting choices. However, the "Role" of RPG was still missing from the game.

I was fortunate enough to receive some very good feedback from playtesters early on which gave me some ideas.

The other "fortunate event" was that I played Artefact, the wonderful solo journaling RPG by Mousehole Press.

"What are you?" is the first thing Artefact asks, giving you a list of objects you can be, and ties specific questions about your story to each of those. 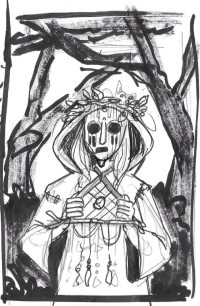 I realised that Superstition did not do so - you, the player, were you, the character in the game. Which is kind of the opposite of what roleplaying is meant to be, so the creation of "Oracle" archetypes for you to play us was an obvious next step. Because this is predominantly a narrative game, I then came up with questions (or writing prompts) to guide the narrative within the particular mindset of the Oracle you are playing.

The role of the chieftain followed soon after, barging into my headspace with the kind of bluster that you would expect from a village leader. Archetypes of chief, such as the True Believer, the Warmonger and the Mediator were obvious categories, but there's plenty more there to explore. Thus we have a protagonist and a sort-of antagonist to drive the story.

But a chieftain is only a representation of the community, and so the "Community" character was born. I haven't put this in the game yet, but it will be one of the sets of questions you can choose from when you manage to beat an Omen with a Ritual. This gives the player a choice on how they play the game and develop the narrative.

Finally, the game is about humankind's place in the natural world. Events happen, both natural and man-amde. I also had a spare 24 cards from a 52 card deck, so the simple option was to divide them in "Calamities" and "Boons", negative and positive events which tied in mechanically with the perceived failure or success of the rituals the oracle creates.

Notice I wrote perceived. These rituals don't work. But how do you explain a natural disaster to someone who believes it was your fault for not getting the ritual right? Therein lies the crux of the game.

By this point, the "ritual" part of the game is actually quite small. It's the Macguffin. When you finish the game, you are left with the description of rituals which may or may not have failed, which may have convinced your community or not, which may have been horribly mistimed or absolutely serendipitous. But the real story you are left with is that of the relationships between Oracle, Chieftain, Community and the world they live in.

I hope you'll have fun creating those stories.